The 2019 Annual Convention of the RPG was organised by Terry Davies and held at the Royal Oak Hotel in Welshpool over the weekend of 27-28 April 2019. Following the usual pattern, this year’s was nominally a 1-day event on the Saturday, although the majority of participants made the occasion an excuse for an enjoyable long weekend. Socialising began on the Friday evening in the hotel bar when old acquaintances were renewed, but the business proper started the following morning. Proceedings were started briskly by Chairman Brian Childs who introduced the first of the speakers Prof. Cedric Pryse-Roberts, one of several guests from the Welsh Postal History Society, whose subject was ‘The Ruabon to Barmouth Railway and the Bala to Ffestiniog Railway’. This talk blended railway history and philately and provided a great introduction to the area. Our next speaker was a Canadian, Charles Spencer, who now runs the Welshpool and llanfair Light Railway, a local attraction that the RPG group were to visit on the following morning. Charles gave us a good insight into the strategies that have helped to sustain and develop the WLLR from its initial days in preservation. Most appropriately the final speaker before lunch, Les Winn, had made a collection of ‘The Railway Letter Stamps of the Welshpool and Llanfair Light Railway’ and this nicely complemented the preceding talk, looking at some of the anniversaries celebrated by the railway during its more recent years. 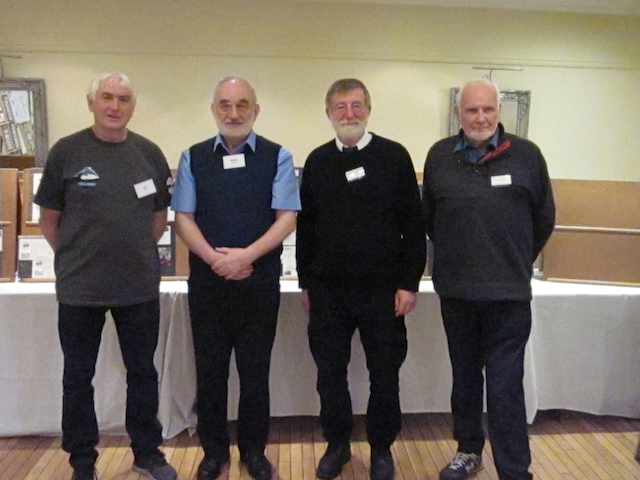 After lunch competition entries were put on display for attendees and our judge, Lynn Roberts to view. Later, following a close contest, the winners of two cups were announced. They were Dominic Wickremasinghe who won the Doncaster Cup with an entry titled ‘TPOs of Posen-Lissa-romberg 1852 – 1945’ and Chris Tennant whose entry ‘The Green Arrow Registered Transit Service’ won for him the Turner-Jackson Cup. The remainder of the Saturday afternoon was free for participants to explore the town but everyone came together again over a convivial dinner in the hotel.

Saturday morning saw most of the group reassemble at Welshpool Raven Square Station in good time to catch the timetabled 11.15 service to Llanfair Caereinion. Fortunately the rain of Saturday had abated and it was a pleasant ride through the green countryside on quite a busy train. At the terminus some opted immediately for the warmth of the cafe but many took advantage of a tour of the workshops and engine shed given by the WLLR’s finance wizard Bob Mason. Participants then went their separate ways, some returning to Welshpool on the 13:00 service while others returned at 15:30hrs. Overall it was a memorable weekend with a nice balance of philately and railways.

Ten displays were given over the weekend: 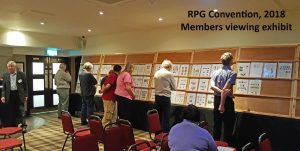 As is usual at the Convention there were also various competition displays where members presented a display in pre-set subject areas. These displays were judged according to laid down guidelines, with the winner in each group being awarded the appropriate trophy for the year. This year there were five such competition displays, some of which will be posted to this web site at a future date

The following trophies were awarded in competitions at the Convention

The Friday and Saturday evening provided ample time for socialising over fine dinners, rounding out an excellent event organised by Iain Wells.

CLICK HERE for further details of the most recent Annual Convention

Iain S. Wells of the RPG and Keith Morris (members of both the RPG and of the TPO & Seapost Society) have just completed their new book and details can be found here

CLICK HERE for more details about the book: The AM Postmarks of the Travelling Post Office
(opens in a separate window)

We are still receiving returns of the questionnaire about members’ railway philatelic interests. When we have sufficient returns in we will compile a List of Members’ Interests which will then be issued to all members. This will enable members with like interests to get in touch with each other and discuss their shared interests.

The RPG is having discussions with the National Railway Museum (NRM), York. These discussions centre around two possible courses of action:

a) Is it practical for the RPG to assist the NRM with queries they might receive from the public about railway philatelic matters?

b) Can the NRM and RPG together work to raise the profile of railway philately?

These discussions are currently being conducted on an informal basis. We will let you know if any substantive outcomes are reached.