Railway Postmarks is a large subject. On this page we cover some basics:

When we speak of postmarks we generally mean marks to show when and where an item was accepted into the national or state-run postal system. Such marks were applied by Post Office staff in normal Post Offices or Sorting Offices to mails (letters or parcels) bearing Post Office stamps. These marks are of great interest to philatelists generally.

•  Postmark:  A postmark is a marking made on a letter or parcel which usually indicates the location/office, plus the date and the time, that the item was accepted by the Post Office postal service. The postmark is usually adjacent to the stamp, and often overlaps it (when it is said to be ‘tied’ to the stamp). Many railway postmarks are Single Ring or Double Ring (as described further below). In the early years, postmarks were applied with a hand-stamp, but machine stamping was used in later years. When a postmark overlaps or covers a stamp, the postmark is effectively also being used as a cancellation mark (to indicate that the stamp has been used … see next).

•  Cancellation (Cancel) mark:  A cancellation is a marking applied by Post Office staff to a stamp or piece of postal stationery to show that it has been used (primarily to prevent the fraudulent re-use of stamps). Cancellation marks usually contain no useful information at all – their purpose is simply to cancel the stamp. [Some early railway company stamps were cancelled with a line or two of crayon or pencil. You may also find ‘CANCELLED’ marks (applied by a hand-stamp) on used railway stamps or unused obsolete stamp stock. Railway company stamps could also be cancelled with dated or undated station name hand stamps and various other markings.] As with postmarks, cancellations were applied with hand-stamps in the early years, and in later years by machine stamping.

Backstamps
Quite apart from the normal use of postmarks, you may find a postmark stamped on the back of a letter. A backstamp is a postmark sometimes put on the back of a letter to record the name of the post office through which the letter has travelled. The final delivery office may also sometimes backstamp a letter; this type of mark is usually referred to as a receiving mark.

As noted above, most railway postmarks are found on letters and parcels which have been carried via the Post Office mails. What follows here is a simplified summary of the types of postmarks found on all Post Office mails, including those dealt with in TPOs, RSOs and the so-called Railway Station Offices.

There are no formally agreed codes to identify each of the various types of postmarks so, for the moment at least, we will continue with the codes which have been used for a number of years in Railway Philately.

•  Single Ring Dated Namestamp (SRDN, or just s/ring):  (as below) The postmark has a border consisting of a single circle. Most railway postmarks are either Single Ring or Double Ring. The T.P.O. in the example here stands for Travelling Post Office. 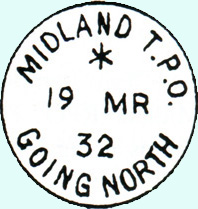 •  Double Ring Dated Namestamp (DRDN, or just (d/ring):  (as below) The postmark has a single ring outer border with another ring inside it. Most railway postmarks are either Single Ring or Double Ring. 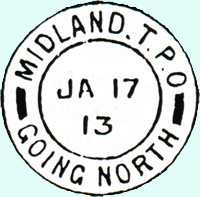 •  Duplex:  (as below) As well as the normal Postmark, there is a Cancellation Mark (called an Obliterator, or Killer) to cancel the stamp. Both marks were imprinted by the same device. The Killer mark usually contained a number which indicated where the stamp was cancelled. 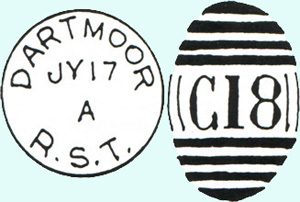 •  Squared Circle:  (as below) The postmark has a circular border which is surrounded by a series of concentric rings – except that these rings are cropped in the shape of a square. These were introduced in Britain in 1879 as an alternative to duplex cancels. They are rarely found as a railway postmark. The R.S.T. in the example here stands for Railway Sorting Tender. 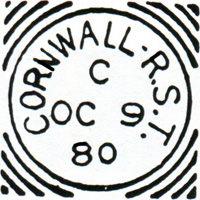 •  Unframed Obliterators: (as below) These are occasionally found as Station Postmarks or cancels, but rarely seen as TPO or RSO postmarks. 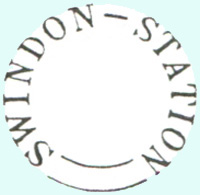 •  Dumb Postmark:  A (partially) dumb postmark is one which contains less information than would normally be expected – see the first illustration below. However, most so-called dumb postmarks aren’t really postmarks at all, they are cancellation marks which have no useful information in them, and whose sole purpose is to mark the stamp in some way so as to prevent fraudulent re-use. Some examples of these are also are given below, but there are many variations. The crayon or pencil marks used to cancel early railway newspaper and parcel stamps could also be referred to as dumb postmarks (viz. dumb cancels). 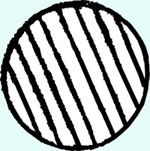 •  Skeleton Postmark:  (as below) A Skeleton postmark is so called because the hand-stamp itself is merely a framework into which you can insert letters and numbers (rather like you might have done with a toy printing set when you were young!). When the normal hand stamp was unavailable for any reason … perhaps it needed some minor repair, the Head Office would temporarily replace it with a skeleton hand-stamp into which the appropriate letters and numbers could be inserted . The S C in the example here stands for Sorting Carriage, and the UP tells us that this mark was applied on the ‘up’ run (towards the capital city, London), rather than on the ‘down’ run (away from London). 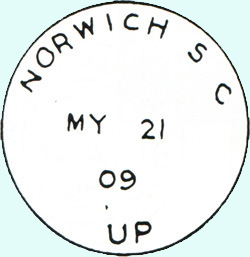 Other:  There is a wide range of other postmarks, but these are less common. Searching for and finding them is a great hobby. One of these postmarks is the Late Fee mark (illustrated below). There are numerous varieties of this mark … in fact, there are varieties of nearly everything!

3.  Other features of Railway Postmarks

As well as what is listed above, there are other features of railway postmarks which are of interest to the more serious collector.

Apart from the actual date within a postmark, there are several other key dates of interest to collectors:

If you are just starting with Railway Postmarks, perhaps none of these dates will yet be of any great interest to you, but the more you get into the subject, the more  significant these dates might become. But that’s entirely up to you!

(The next three paragraphs refer to the whole postal system in general, not just offices with a railway connection.)

So far we have talked about postmarks as being marks applied to letters (and parcels) for the purpose of cancelling the postage stamp and also recording the date, time and place which the letter (or parcel) was accepted into the postal system. This is correct, but it is not he only use of postmarks.

A letter could, on its journey through the postal system, be handled by several offices. In certain circumstances, some of these office might apply a postmark to the back of a letter to record the fact that the letter had passed through  that particular office. The handstamp used in such cases would normally be the same one as might otherwise have been applied to the front of letters initially received in that office. Back stamps are therefore a secondary source of postmarks.

So, what about offices with a railway connection? Well, back stamps are also found on letters handled by TPOs, by Railway Sub Offices, and by Railway Station Offices. As you might expect, such items are much sought after!