What is Thematic Collecting (or Thematics as it is often called)?

A little further down we will progress to Thematic Collecting and the Railways.

Before ‘Thematic Collecting’ was invented …

Stamp collecting started more or less as soon as postage stamps were invented. In the 1850s and 1860s, the first philatelists collected stamps from every country in the world which issued stamps.

Why should they do otherwise? The total number of stamps was not great and, apart from a few rarities, completing a collection of all the stamps in the world was not an impossible goal.

Slowly at first, and then at an ever-increasing rate, the total number of stamps issued began to multiply. The task of completing a world collection became less and less achievable. Philatelists reacted by narrowing their collecting to a group of countries (such as, for example, the British Empire), or to a single country, or even to a particular period of a single country. But, by and large, people still collected stamps from a particular country or region.

The advent of Pictorial Stamps 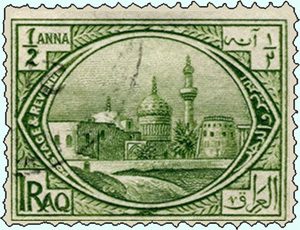 Then, towards the end of the 19th Century, pictorial stamps began to make their appearance. This opened the door to a new way of collecting stamps. A few people switched from collecting ‘countries’ to collecting stamps about particular topics or themes. Nevertheless, it wasn’t until after World War II that people seriously began to collect stamps according to their design rather than their country of origin. Thematic Collecting was thus born. 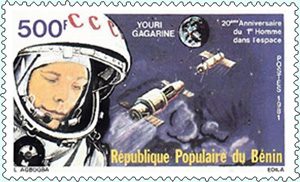 The choice of theme is entirely personal – whatever you fancy. Thematic Collecting has now become one of the most popular ways of collecting stamps. Furthermore, it has expanded to include not only stamps, but also other artefacts such as postal stationery, postcards, photographs and illustrations etc., which add something of interest to the chosen theme or topic.  (Note: some of these are not allowed in Thematic Competitions – see further down.)

The key aspect of Thematic Collecting (Thematics) is that you collect stamps according to their design rather than their country of origin.

In Britain we call this Thematic Collecting or Thematics. However, collectors in the Unites States refer to it as Topical Collecting. Never mind – it’s the same whatever you call it!

Thematic Collecting and the Railways

From our standpoint (as the Railway Philatelic Group), Thematic Collecting starts with choosing a railway related topic or theme which appeals to you and then collecting railway stamps and other railway artefacts from all over the world to illustrate that topic or theme.

We’ll start here with a selection of railway stamps which would grace many a thematic collection (not all shown at the same scale).

[The illustrations above are presented with little narrative or explanation. However, if you are presenting any sort of display or competition entry, each item should be accompanied by some informative text.]

What else might I collect apart from Railway Stamps?

The thematic collector will use his or her ingenuity in order to illustrate the theme, and look far and wide for material, such as:

1.  Meter Marks / Meter Stamps with a Railway  connection
A meter stamp or meter mark is the mark made by a postage meter machine (in lieu of an ordinary postage stamp and cancellation) to indicate that postage has been paid on a letter or parcel. Meter stamps are widely used by businesses and organisations as they are more cost efficient than using postage stamps … and can also include an advert for your company.

Suppose your theme is Christmas on the Railways. This meter stamp (shown courtesy of the ozrevenues web site) would make a splendid addition to your collection.

If your theme is simply Railways on Stamps, then the following meter stamp advertising Bressingham Steam Museum Trust will fit in very nicely.

There are lots of different meter stamps, many of which are suitable for inclusion in railway thematic collections and can often be acquired fairly cheaply.

2. Slogan Postmarks mentioning Railways
From time to time slogan postmarks are sponsored by various companies or organisations. As well as the normal postmark, there is a slogan to celebrate an event or to promote an activity. If your theme was Railway Centenaries, the slogan postmark below would fit it well – it celebrates 100 years of South African railways from 1860 to 1960: 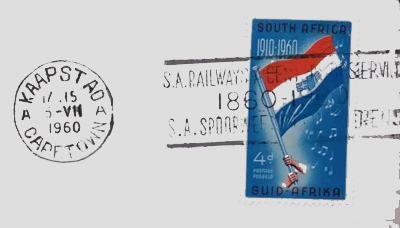 If your theme was Comfort on the Railways, the slogan postmark below might take your fancy because it tells us that – if you’re going by train, it’s better to travel midweek because …
“THERE IS MORE ROOM / ON MID WEEK TRAINS”.

Special postmarks, created at the expense of a sponsor to commemorate a particular event, are usually used for one day only … but can occasionally be in use for a period of several days. Some hundreds of different special hand-stamps have shown a railway theme, many of them well designed – but in a few cases the designs leave a lot to be desired!

If the subject of your thematic collection is George Stephenson, then the following postmark illustrating the Rocket should be right up your street! 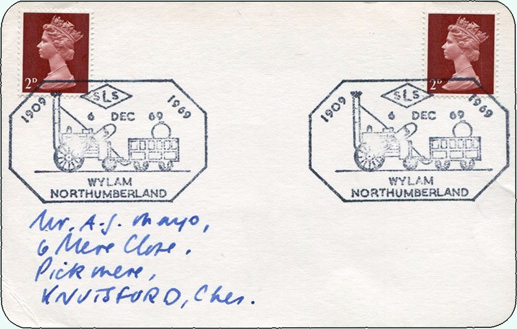 4.  Stamp Booklet Covers depicting Railways
Another source of inspiration for the thematic collector is the stamp booklet cover. If your theme is Narrow Gauge Railways, both of the following the following booklet covers would appeal to you.

There are literally thousands of postcards – old and new – depicting all manner of railway items and we will be adding some illustrations to this page presently. (Be aware, though, that postcards are not always acceptable in displays which are to be entered into competitions.)

Your collection will be based on a railway theme of your choice, with stamps and other items drawn from countries around the world. There are two basic approaches to Thematic Collecting (and everything in between).

a) Collect a Theme – for fun
Your collection can be based simply on a theme of your choice (for example,  Railway Bridges, or Railway tracks) with the stamps and other philatelic items in it all relating to railway bridges (or railway tracks). This more loosely defined way of Thematic Collecting is extremely popular, and is probably where all Thematics collectors start. There are no restrictions as to what you collect and you decide what goes into your collection. Perhaps the most popular theme is simply Railways on Stamps!

A display called About the RPG was presented at the 2017 RPG Annual Convention in Shildon. Part of that display included an actual railway thematic display about Toy Trains on Stamps.

b) Collect a Theme – with an eye to perhaps entering Thematic Competitions
After collecting your theme for a while you might decide to get a bit adventurous. If you decide to have a go at entering a Thematics competition you need to be aware that there will be rules as to what can be included in a competition entry. One rule will usually be that non-philatelic items such as photographs or picture postcards are not allowed. (Thematic collectors who collect ‘just for fun’ also sometimes follow this guideline, but that’s up to you).

The judges will have guidelines on marking, and these will include how the marks will be awarded. A simple marking breakdown is given here (more complex systems also exist):
•  Marks for Writing up the Entry/Display:   30%
•  Marks for Knowledge and Development of the Theme:   40%
•  Marks for Condition of the Material:   30%

Nearly all railway thematic collectors start collecting ‘for fun’ – some go on to competitions.

Collectors will sometimes give displays to their local societies or other groups. It is quite common in such displays to follow the sort of rules required for competitions, but this is not essential.

a)  Guidelines for Entries in the Thematic Class (York Philatelic Association)

This document is an extract from the Handbook of the York Philatelic Association (to whom we express our thanks). It consists of a single page, and gives simple and clear guidance on how to prepare a thematic competition entry. Definitely worth having a look at!

b) Current Trends in Thematic Philately by Vojtech Jankovič (Slovakia)

In contrast to the YPA guidelines above, this document is a full-blown treatise on the development of thematic philately over the years, and the stages through which it has passed. It concentrates heavily on the progress made in regional, national and international thematic competitions, but nevertheless concludes that there is still a place today for every form of thematic collecting, even in its very simplest form.

There are so many ways of collecting railways on stamps – why not make a start now?