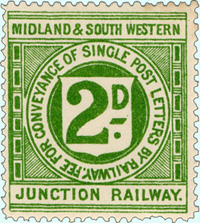 To comply with the Post Office’s monopoly for the carriage of letters, a Post Office postage stamp had to be affixed to the letter (as well as a Railway Letter Stamp).

Railway letter stamps were supposed to be stuck in the bottom left corner of the envelope but this rule was often ignored – railway stamps were often stuck adjacent to the Post Office stamps. Collecting these railway letters stamps has been a major attraction over the years. Information is plentiful, and it can be fairly cheap to start a railway letter stamp collection.

Under the 1891 agreement, the railway letter stamps of all signatory railways had to conform with a format laid down by the Post Office. The exact design structure was specified by the Post Office, along with the size and colour of the stamps (they had to be green). Thus, all railway letter stamps looked quite similar (though not always identical, as can be seen below). 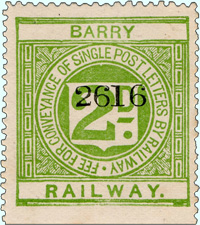 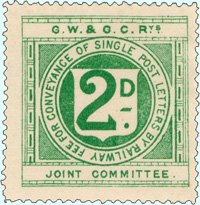 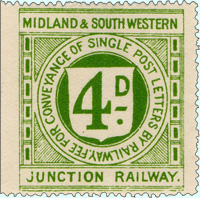 You will notice that some railway companies overprinted their railway letter stamps with a serial number (usually called a control number) to reduce the risk of theft or fraudulent usage. (This practice was often followed for newspaper stamps and general parcel stamps also.)

More than a hundred British railway companies issued railway letter stamps under the 1891 Agreement. However, as always in life, where there are rules you will always find someone who doesn’t quite follow them as intended …

The first letter stamp which the North Eastern Railway issued was red – which did not seem to upset the Post office too much. But they were greatly offended by the wording RAILWAY LETTER POST at the foot of the stamp. They felt that this wording infringed their monopoly.

A few other railway companies issued red letter stamps, but this did not seem to provoke much reaction from the Post Office because the wording on the stamps was deemed to be acceptable. 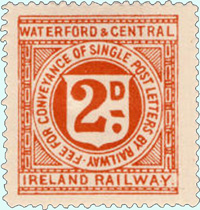 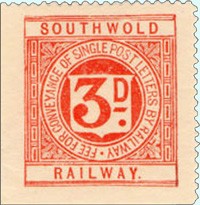 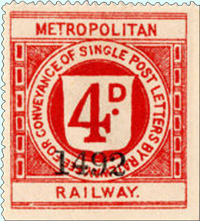 Other colour variations are known, including a blue Londonderry & Lough Swilly Railway letter stamps with a surprising face value of 1d, and a Stratford-Upon-Avon & Midland Junction Railway stamp printed on orange paper. 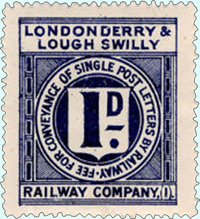 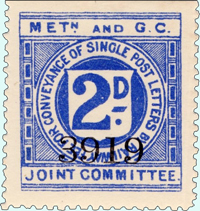 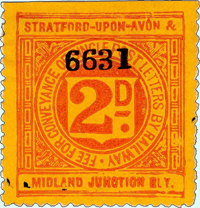 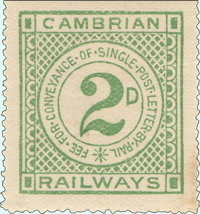 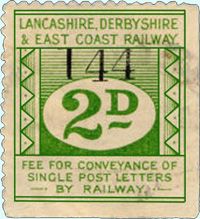 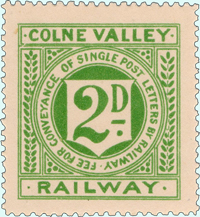 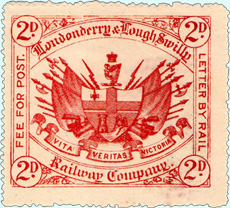 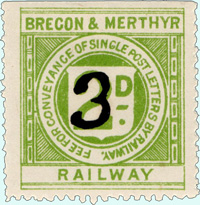 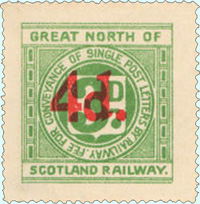 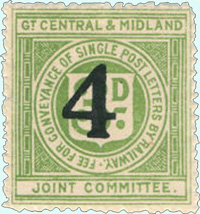 There are also issues where the company name was overprinted. 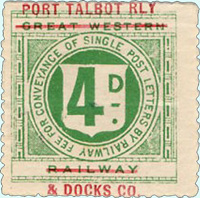 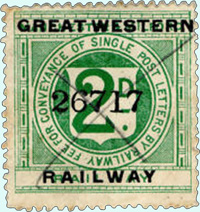 So, as you can see, there are lots of interesting variations in traditional railway letter stamps, despite the obvious similarity between many of them.

•  In 1901 that Herbert L’Estrange Ewen published his 448 page History Railway Letter Stamps. Two factors contributed to this being a definitive work on railway letter stamps. Firstly, as railway letter stamps were effectively issued under the direct supervision of the Post Office, extremely detailed records were kept of each individual print run … illustrations of the exact design used for each printing, the quantity of stamps printed, any flaws or faults recorded etc.  Secondly, railway letter stamps had only been in use for ten years, so Ewen had easy access to these contemporaneous in-depth records. Of course, Ewen’s catalogue has long been out of print, but CD copies can sometimes be found on Ebay.

There are two more recent Railway Letter Stamp Catalogues which are both worth getting.

After the 1948 Nationalisation of the Railways, British Railways similarly used their ticket-style PAID PARCEL stamps on railway letters. At that point in time, none of the few remaining post-nationalisation independent railway concerns had a railway letter service, so for some 20 years from the mid-1930s no railway letter stamps were printed at all – by anyone.

Are damaged stamps of any value?

Yes, indeed they are. Unlike Post Office stamps, railway stamps were at times subjected to quite adverse conditions, and many are in less than pristine condition. Some of the rarest railway stamps are only known in what can best be described as dreadful condition. This does not make them any less collectable!