What is the Exchange Packet?

The Exchange Packet is a way in which RPG members can sell their unwanted material to other RPG members – a bit like a modern day version of the Approvals booklets which stamp dealers of old circulated. You can use the Contact Us facility to request details of what is currently available.

‘Selling members’ send booklets of material to the Packet Secretary, who assembles them into packets. Packets are then circulated amongst ‘circulation members’ who have asked to be included in the circulation of material covering topics of their choice (but there is no compulsion to buy at any time).

There could be up to three Packets (or none at all) in circulation at any time. Each Packet is made up of between 3 and 12 Booklets, with each Booklet having 10 single-sided pages. Each Booklet contains material from a single seller, so the Packet could contain material from several different sellers.

These circulating Packets have long been one of the most popular activities of the Society. Members now use the RPG Exchange Packets to buy and sell Railway Postal History as well as Stamps. This is of great benefit both to those who have duplicates they wish to be rid of, and to collectors who want to fill gaps in their collection … usually at lower prices than they would have to pay commercially.

What kind of material goes into a Packet?

We get little material in the following groups, but we could set up a Packet covering these areas if the opportunity arose:

Who can participate in the Packet?

This facility is limited to RPG members only. It is further restricted to UK members of the RPG only because:
a) Material for Packets cannot be accepted from RPG members outside the UK. Such material may attract VAT on entry to the UK, and the RPG cannot accept liability for VAT.
b) Packets cannot be sent outside the UK because the terms of the Members’ Compensation Scheme do not cover material sent abroad.

How does a Packet work … for Sellers?

If you have duplicate material for sale, or material covering areas which you yourself don’t collect, the Exchange Packet offers you a means helping other members enhance their own collections while at the same time earning a little revenue yourself.

(Caution – Sellers should bear in mind that, because of the repeated handling of material during the transit of a Packet,  high value items are unsuitable for inclusion in the Packet. You may wish to consider offering such items for sale in the RPG Postal Auction.)

Material for sale is assembled by the Seller into 10-sheet Booklets. The booklets are about 8 inches by 5 inches (so that they fit into the travel boxes we use to post them out in). You can make the empty booklets up yourself, or you can obtain them from the Packet Secretary at 60p each (plus postage). You will normally use cellophane strips or stamp hinges etc to hold items on a page (though it is obviously preferable not to use stamp hinges on unmounted mint stamps).

You can also use plastic wallets for larger items such as covers or manuscripts, but all items (folded if necessary) must be A4 (the size of the one large travel box we have) or smaller.

The seller will first make or acquire some booklets and assemble his or her material into one or more of these booklets. Each booklet will normally contain material from a single collecting area only (see above).

The seller will briefly annotate each item in the booklet, and above it write a selling price, the Stanley Gibbons reference number (if applicable), and any other useful information, such as um (unmounted mint), mm (mounted mint), used etc. Stamps are better presented by using just one side of each sheet in the booklet, but manuscripts or covers work well mounted on both sides of the sheets. The better the presentation, the more likely it is to sell! When a booklet  is ready, the seller will forward it to the Packet Secretary. 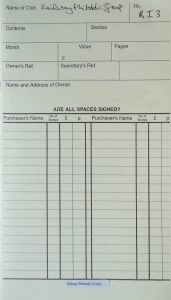 The Packet Secretary will then group together a number of booklets into a Packet (usually from 3 to 12 booklets per Packet), pack them into one of the travel boxes, and start the Packet off on one of the Circulation Lists. Packets will usually cover just one area of interest (see above list), but mixed Packets may at times  be provided. Each Circulation List is made up of circulation members with similar declared interests.

Each Packet will be accompanied by a Master List of the contents for that Packet, and also a number of Purchase Slips to be completed by buyers.

When a Packet has completed its circulation and been returned to the Packet Secretary, the amount accruing from sales fees is forwarded to the seller, less the following deductions:

Footnote: The RPG quarterly Newsletter can include brief mention of some items for sale by members. If you have a few items which you want to sell but don’t want to use the Exchange Packet, you may wish to consider asking if they can be mentioned in the Newsletter.

How does a Packet work … for Circulation Members?

On receiving a Packet, you can browse it to see if you wish to make any purchases from that Packet. To ensure that packets don’t get ‘stuck’, you should move the packet on to the next member within 2 days (48 hours) of receiving it. There is no obligation to buy anything from any particular Packet. Whether or not you purchase anything from the Packet, you are still responsible for the cost of forwarding the Packet to the next circulation member on the list.

If you make any purchases, you firstly sign your name in the gap you have removed the item from, then you add the cost of your purchases from each booklet on the booklet’s cover, and you then annotate the Master List for the Packet accordingly.

When you have completed your purchases (or if you have made no purchases at all), you forward the Packet to the next name on the circulation list.

If you forward the Packet by post you must obtain a CERTIFICATE of POSTING from the Post Office. At the moment, posting the Packet onwards will cost approximately £3.

If instead you forward the Packet by hand, you must obtain a WRITTEN RECEIPT from the member you have handed the Packet to.

If you made any purchases …

As soon as you have forwarded the Packet you must complete a Purchase Slip, giving the relevant details. You then make out a cheque to The Railway Philatelic Group for the total of your purchases and send the Cheque, Purchase Slip, and Certificate of Posting (or hand written receipt) to the Packet Secretary.

If you made no purchases this time …

As soon as you have forwarded the Packet you must either …

(2)  email the Packet Secretary to notify him that (a) you have made no purchases from this Packet, and that (b) you have obtained a Certificate of Posting (or a hand-written receipt).  If you choose to notify the Packet Secretary by email in this way, it is essential that you RETAIN the Certificate of Posting (or hand written receipt).

Why not join a circulation list or become a Packet seller NOW? You might find just what you are looking for … and at a price you can afford! Or you might find cheap material in a subject area which you are thinking about starting to collect.