To finish this display we look at a few unusual items:

a)   RSO Handstamps with Mistakes

Of course, everything is capable of having errors and mistakes, and RSO handstamps are no exception. However, surprisingly few RSO handstamps are known with mistakes in them. Temporary (or skeleton) handstamps are the most prone to error due to the urgency with which they had to be provided, and the irregular nature of the date setting slugs compared to the normal handstamps.

The North Yorkshire coastal village of Staithes was provided with a small 27 mm skeleton handstamp for only one day in 1903 (viz. used only on 7 November 1903): 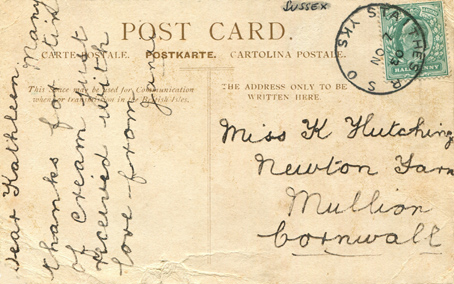 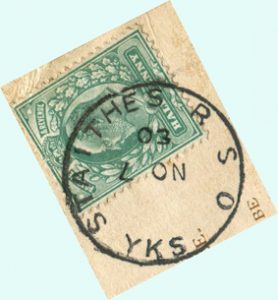 Curiously, the regular Staithes R.S.O / Yorks handstamps (a 23 mm single ring stamp) is not recorded until 24 December 1910 – long after RSOs had been abolished, and is subsequently known to have been used continuously until 21 March 1922. The practice using of obsolete handstamps appears to have been fairly common; offices would often not be provided with a ‘non-RSO’ handstamp until the obsolete RSO handstamps was no longer serviceable.

b)   RSOs with their own Sub Offices

Here is a postcard (with a picture of Wolsingham on the back) cancelled on 3 June 1906 at the Hamsterley Office, which was itself a ‘sub-sub-office’ of Witton-le-Wear R.S.O.   As you can see, both offices are shown on the postmark. (The postmark on the expanded cut-out below has been computer-enhanced)
(recorded used 9.10.1902 – 4.8.1930) 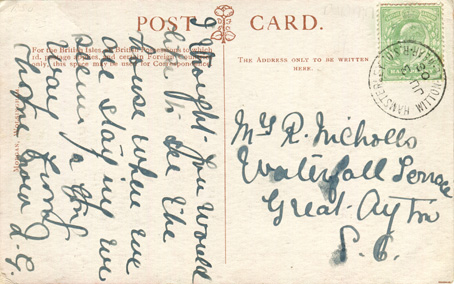 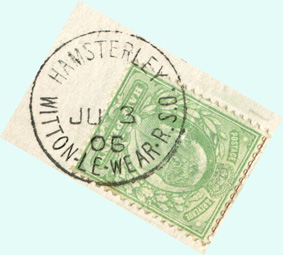 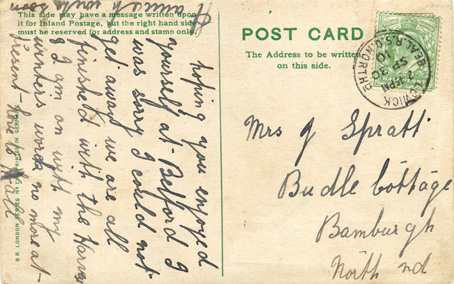 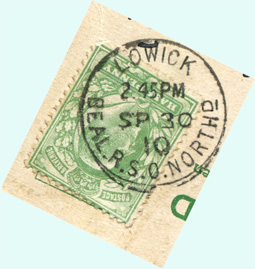 c)   The most Exclusive of all RSOs

Finally, we come to what is probably the most exclusive RSO postmark of all time!  The Sandringham Post Office dealt with mail from the Royal Household when the Royal Family were in residence at Sandringham.

The Sandringham Post Office became a Railway Sub Office in 1900 to deal with money order and telegraph business, and was issued with an Official Paid / Sandringham R.S.O. Norfolk handstamp on 28 August 1901. This handstamp was always struck in red, and was always accompanied by the Royal Cypher struck in violet. The example here was sent to a Harness Maker in Snettingham and cancelled on 6 October 1911. (recorded used  1902 – 1924) 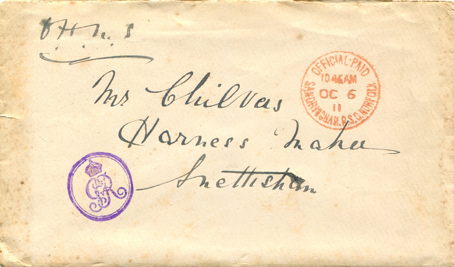 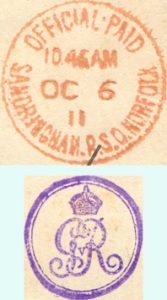 Indeed, not only can we show you the cover, we can show you the actual letter which was inside the cover! The letter asks the Harness Maker to set up a new account to deal with business from Sandringham Estate Fire Brigade. 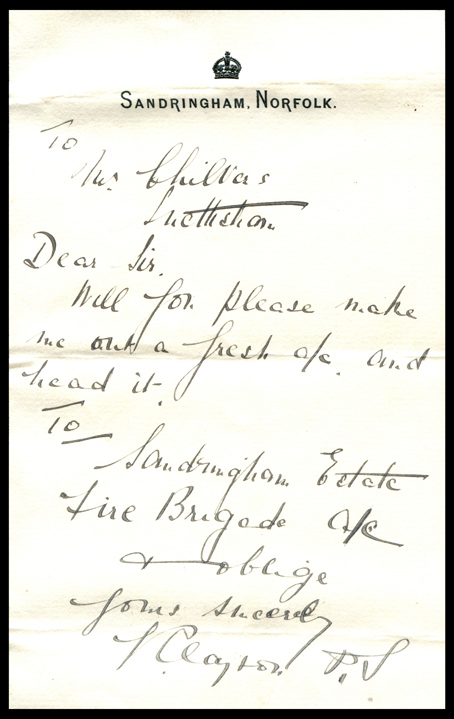 The Era of the Railway Sub Office – End of Display