How can we speed up mail delivery?

As mentioned on an earlier page, all local post offices (sub offices) initially sent unsorted mails to their head offices – where they would be sorted, and where mails for distant parts would subsequently be forwarded to the nearest TPO. In the late 1850’s it was decided that time could be saved by not sending unsorted mail from some local offices to their Head Offices, but instead transfering it directly to the nearest TPO.

These local offices were designated (called) Railway Sub Offices (RSOs), and could pass bags of unsorted mail to the TPO (or receive bags of sorted mail directly from the TPO) without it needing to go via their Head Offices. The first ever Railway Sub Office was created in 1855 at Braco (Perthshire). It should be noted that these RSOs were not necessarily located at railway stations – or even near railway stations. Letters and parcels posted at an RSO were postmarked at the RSO, bagged, and passed to the TPO to be sorted. This gave rise to another wide and varied range of railway postmarks.

Virtually all types of postmarks have been recorded incorporating the designation ‘RSO’ including duplexes, double circles, single circles, skeletons and dumb parcel cancels (but not squared circles).

This arrangement covered England, Wales, Scotland and the whole of Ireland. There were at least 313 Railway Sub Offices in Wales, 435 in Scotland and 794 in England, although the real numbers were probably a lot higher. Work is still ongoing to establish the number in Ireland.

Were all RSOs issued with RSO handstamps?

Handstamps incorporating the letters ‘RSO’ could have been issued to all offices which were designated as RSOs, but it would appear that this did not happen. For example, it is known that the duplex stamps issued to some offices when they became RSOs did not include the letters ‘RSO’; this probably applies to other styles of postmarks also.

There is therefore a whole further study of postmarks used at offices which, when they were designated as RSOs, did not have the letters ‘RSO’ in their postmarks.

When the Post Office announced that an office was to become a Railway Sub Office, that office’s postal address was changed to incorporate the text ‘RSO’ and to exclude the name of the Head Office. For example, when Lynmouth became an RSO on 1 March 1903, its postal address was changed from Lynmouth, Barnstable to Lynmouth RSO, North Devon. This was effectively an instruction to the Sorting Office Staff on the TPO that a separate bag was to be made up for the Lynmouth Railway Sub Office (RSO), and items for it were not to be included with mail for its previous Barnstable head office.

Thus, RSO became part of the postal address of each such railway sub office and appears on all sorts of documents such as parcel post labels, letterheads, invoices etc; these items are quite scarce and very collectable.

Some Railway Sub Offices even had their own sub-offices. For example, the RSO in the town of Callington had a sub office in the nearby village of Linkinhorne, where a single ring  LINKINHORNE / CALLINGTON.RSO  stamp was used.

Similarly, the RSO in the town of Padstow had a sub-office at the nearby village of St. Merryn, where the handstamps used was ST.MERRYN / PADSTOW.R.S.O. 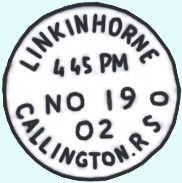 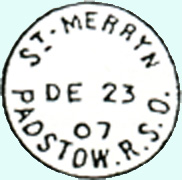 There are some very interesting locations which became Railway Sub Offices, such as the post offices on islands like Skye and the Orkneys which did not have any TPOs. Those can be fairly easily explained: the bulk of their mail was received from the Highland TPO, which despatched sealed bags by steamer to the islands.

However, there are other islands (such as Mull, Islay and Arran) that had Railway Sub Offices on them, but which had no obvious connections with any normal TPO. It would appear that these particular island offices received their mail via MacBrayne’s Steamers, at least two of which had Post Offices on them – which technically made them ‘Travelling Post Offices’ … but on board a steamer rather than on a train. More research is needed in this area.

The end of Railway Sub Offices

Railway Sub Offices officially ceased to exist on 1 August 1905. By this date there was a properly surfaced road system in place with mechanised road-going vehicles, and it became less important to use all the previous methods of speeding up the mail.

However, the basic RSO system continued for many years and postmarks including ‘RSO’ were still in use as late as 1944. If a canceller had to be repaired after an office ceased to be an RSO, the R of RSO was usually deleted from the handstamp and replaced either by a space or by a dash (–).