The Start of Railway Delivery Services for General Parcels

Although railway newspaper delivery services began in 1855, it was not until the early 1870s that the railways expanded into the delivery of general parcels. Prior to that, anything sent by rail was simply treated as goods/freight and carried on goods trains. Consignments of goods were dealt with under the Waybill System, whereby a waybill was filled out with information about the sender (consignor), the recipient (consignee), the point of consignment, its destination, and the route to be taken.

All large or heavy consignments continued to be dealt with under the Waybill System, but the introduction of stamped parcels (carried on passenger trains) made it much easier and simpler for members of the public to send parcels. The weight limit for parcels was usually 112 lbs (pounds weight), and everything over that weight went as freight by the Waybill System (and carried on goods trains).

We look here at the parcel stamps of the multitude of independent crailway companies prioe to the 1923 Grouping of the Railways. Many companies produced attractive parcel stamps which obviously ‘looked like stamps’, and we present some examples below. Note that the ½d red stamp at the right end of the top row was a ‘dual purpose’ stamp, and was designed for use both as a parcel stamp and a letter stamp.

As time went on (but still prior to 1923) some railway companies opted to spend less money on stamp design and production, and some stamp issues looked more like poorly printed labels. Some carried the text PARCEL STAMP, while others had the confusing text STAMP LABEL. Some said just LABEL, and others had no indication at all what their use was.

Furthermore, as another money-saving feature, many of these stamp/labels were printed in rolls (from which you could tear stamps off one at a time) rather than in perforated sheets. Do not be confused by all of this – they were stamps … even though they were a lot less attractive than their earlier counterparts. It was quite common for this type of parcel stamp to have space for station names, and every station down the line could have its own station-name stamps. Here are some examples:

Why would so many railway companies use the same stamp design? At this distance in time nobody is really sure. The best guess seems to be that there was some overlap in the Boards of Directors of the companies, and ideas just got shared around. But who knows?

Parcels are just parcels … aren’t they? Well, the answer seems to be:  “not always”. Some companies decided that certain commodities had to have their own parcel stamps – things like corn samples, grain samples and farm produce. There were also news correspondance stamps which were for roving reporters to send their articles/copy back to their newspapers. (Note: some illustrations here are not drawn to scale)

Have you ever seen a stamp for Sausage, Meat and Bacon before (row 2, left)?

As noted on the previous web page, in 1923 the government passed an Act of Parliament which which merged the independent railways into four huge companies … the so-called ‘Big Four’ (the London Midland & Scottish Railway, the London & North Eastern Railway, the Southern Railway, and the Great Western Railway).

Here are some LMSR parcel stamps. Notice the joint LMSR/LNER issue (bottom right) which was only issued at Carlisle Citadel Station.

Here are some LNER parcel stamps. The stamps in the first row are provisionals, the rest are various definitive issues. The small stamp in the last row is the final LNER definitive issue.

The Southern Railway also issued its own parcel stamps, but fewer varieties. Railway stamps are seldom found in pristine condition – the state of the 5d stamp below is not uncommon!

Both the LMSR and the LNER also issued stamps similar to the ‘universal’ design (see earlier on this page) issued pre-1923 in Scotland and the border region.

As again noted on the previous web page, in 1948 he government passed an Act of Parliament which which merged the ‘Big Four’ ( along with all major road transport concerns plus the docks and ports etc.) into nationalised British Railways.

Here are some examples of provisional British Railways parcel stamps (based on the designs of predecessor companies).

Here are two definitive British Railways parcel stamps (they are stamps, although BR have dropped that term from the printing).

These parcel stamp/labels were also often used as letter stamps.

Finally, here are a couple of ‘oddities’.

British Railways (as the RailwayExecutive) ran a jointly owned parcel service with Huddersfield Corporation … on the Huddersfield trams and buses, and issued the following set of stamps. The 4d and 8d stamps have not been seen. 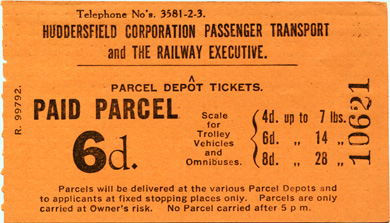 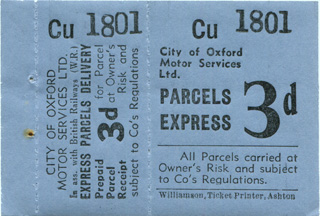 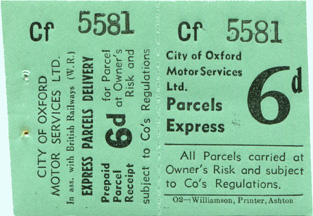 Many of the stamps shown on this page also have several print varieties – variations from different print runs. Remember that this is only an overview of Railway Parcel Stamps, and as such can only cover a fraction of what is out there in the real world! There is much more to find out if you keep digging!