[The Postal Entry Display Competition at the 2018 Annual Convention was won by Mike Tuttle’s display on Crewe Railway Station and its Railway Philatelic Connections – sincere congratulations and thanks to Mike! Whereas many displays select a particular aspect of Railway Philately and cover that aspect in considerable depth, Mike’s 14 page display selects an individual railway station (Crewe) and examines its railway philatelic connections over the years. Mike’s display has now been adapted here for display on the RPG web site.]

When the Grand Junction Railway opened on 4 July 1837, Crewe was just one of the stations on the line. However, this was to change quickly. 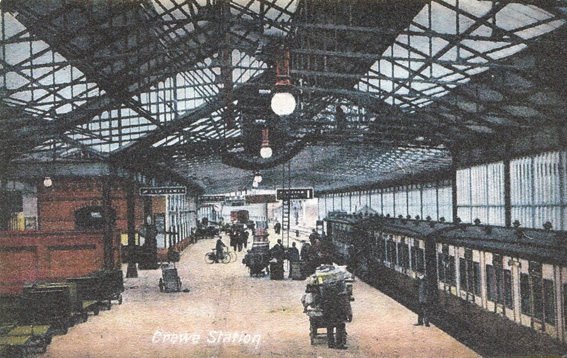 The land around the station was largely flat, and relatively cheap … making it ideal for development. Moreover, Crewe was well positioned on the Grand Junction Railway, being halfway between Newton Junction to the north and Birmingham to the south.

The station itself was developed and enlarged in several stages:

1840  Opening of the Crewe to Chester Railway line
1848  ‘through’ lines increased from 2 to 4 to provide for lines to Carlisle and Scotland plus increased traffic on the line to Chester
1867  Station enlarged, with separate bays provided for local traffic
1903-5  Station doubled in size, with a third island platform
1961-5  electrification of lines through Crewe